Here was a bit of good news to wake up to, courtesy the folks at Daily News Journal:

MURFREESBORO, TN — On Wednesday, 86-year-old Felix Johnson was handed keys to a brand new home, thanks in part to a grant from the Community Development Block Grant program through a partnership with the city of Murfreesboro.

"I've been wanting to get this done for a long time," said Johnson, who couldn't seem to stop smiling as friends and family milled through the newly constructed two-story home on South Highland Avenue.

The new home was built on a lot where his former home once stood. He'd lived there for decades in the circa 1900 home, but in recent years, it had fallen into great disrepair. The task of maintaining an old home was overwhelming, and Johnson said there was "just too much" to do.

So Johnson and his family approached Murfreesboro's Community Development Director John Callow about how the city could help.

"The house was just substandard in so many different ways. It was really uninhabitable," Callow said.

But Callow, who is also a member of the Mayor's Homeless Task Force, had resources to help Johnson.

"This is part of our housing rehabilitation program. Sometimes when you do inspection on a house — and we could put a gillion dollars into this thing — it's still not going to be good (enough to fool with repairing it)," said Callow as he toured Johnson's new home before handing the elderly man his keys.

One of the options to help fix Johnson's living situation was available through the Community Development Block Grant, a HUD program that provides communities with resources to address needs to ensure viable and affordable housing to those in the community who need it most.

In order to qualify, Johnson had to meet certain criteria, including income — and he had to own his own home, which he did.

"Then we came in, cleared the site and started over again," Callow said.

Although Johnson's house wasn't built by Habitat for Humanity, the plan came from the nonprofit building program.

Project builder James Brown said the plans worked well to pack a large amount of house in a small space.

"It's 1,178 feet. It doesn't look that big from the outside, but it is. It's efficient, it's livable," said Brown, showing off his handiwork. There are three bedrooms; Johnson's is downstairs and his caregivers have two rooms upstairs. Johnson's house also has a laundry room, two baths, attic storage, wide doorways to accommodate wheelchairs and a spacious kitchen with plenty of storage.

And there's a large front porch where Johnson can sit, although he's hoping someone finds him a nice rocking chair, so he can enjoy the view.

"We build big front porches on these homes on purpose. People in this neighborhood love to sit on the front porch," Callow said. 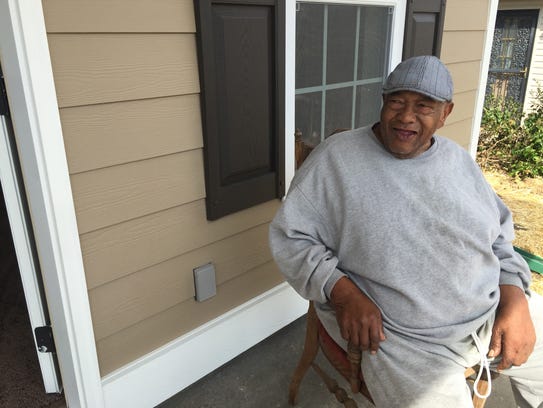 The city of Murfreesboro's Community Development Block Grant helped fund the construction of this home for 86-year-old Felix Johnson, whose home was in great disrepair. (Photo: Nancy De Gennaro/DNJ)

Johnson's home isn't the first — or only — project to come out of the CDBG.

"We're doing a lot of programs. We fund this program. We've got a down payment program for first-time homebuyers that we're funding out of this. We're funding an acquisition program, which buys a lot every year for Habitat (for Humanity) to build on," Callow said.

There are also partnerships with various nonprofits in town. Currently, Callow is working a project with Doors of Hope, which aims to reduce recidivism rates, as well as the community garden project with The Journey Home, which provides free meals and services to those in need.

Callow said his first CDBG project was 10 years ago and can be seen from the back side of Johnson's new home. Others have been built since, and more will be built in the future.

"I was talking with (the late) Beth Smith, one of my heroes (and former Rutherford County Habitat for Humanity director). We talked about housing and we talked about how do you impact a neighborhood. Well, you do it one house at a time. Look around this neighborhood," Callow said, pointing to multiple homes within walking distance of Johnson's new one.